This autobiographical book details the anecdotes in Candace’s life – which in itself reads like a movie – including her life in New York and her working at the famous Tropicana Club as a showgirl, where she rubbed shoulders with some of the mafia’s most famous – and dangerous – characters. She gives many never-before-told juicy skinny behind the cameras of Carnival of Souls. Then she details her ordeal with the most cunning betrayal by her ex-husband culminating in one of the most terribly unjust divorce trials ever seen in the American court system. 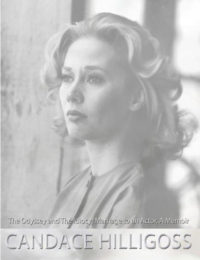 $21.00 – $28.00
THE ODYSSEY and THE IDIOCY, MARRIAGE to an ACTOR, A MEMOIR I once was told there are three kinds of men I should never marry. Working actors. Non-working actors. Between jobs actors. That describes my husband to a T. For twenty years, I hung in with this guy.  Supported him, massaged his ego, responded to his every whim, cried with him, rejoiced with him, and had his children.  And, all the while, gave up my career in theater and film so I could stand by him until at last he knew success. And with his success came adulation, and with adulation, came sexual affairs, and with sexual affairs came divorce.  If the marriage was hell, divorce proceedings were Armageddon.  He did everything to intimidate me, belittle me and frighten me.  Do I regret that I never married the boy back home?  Absolutely not. If had stayed in Huron, South Dakota, I would have missed the experiences with: Marilyn Monroe, Mel Brooks, Vivian Blaine, Hume Cronyn, Jessica Tandy, Daniel Mann, Jacqueline Onassis, Roy Scheider, Kurt Vonnegut and a summer living with Veronica Lake. My odyssey began when I attended the University of Iowa, Iowa City then, a year after graduating from The American Theatre Wing, I danced at NYC’s Copacabana before gangsters and celebrities as one of the “World Famous Copa Girls.”  At the same time, I was accepted into Lee Strasberg’s acting classes. It was there I met my charming future husband. How could I ever have guessed that years later, he would file for a divorce during the longest Screen Actors Guild strike in the union’s history. And that is just ACT ONE ―